A number of good streaming video ECG lectures by him in this website. Click here to assess.

Some highlights from the class: 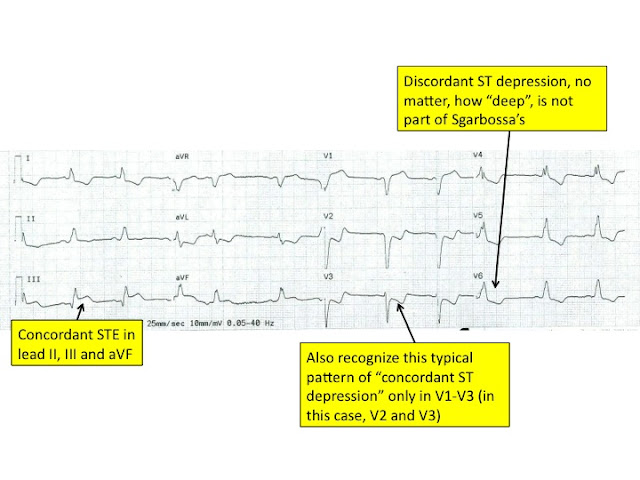 The dictum that "in the presence of LBBB, one cannot diagnose myocardial infarction" is no longer true.

The three Sgarbossa criteria are the two concordances (elevation and depression) and one discordance (elevation). Discordance depression IS NOT part of Sgarbossa's criteria.

Discordance elevation requires an elevation of more than 5 mm as it obeys the rule of appropriate discordance.

Concordance depression is only for V1 - V3, but it is kind of a gestalt pattern recognition thing, because if you see, you should recognize it immediately.

Both concordances are more specific than the discordance elevation.

EMS123lead.com has a nice ECG on concordance elevation in this link (click here).

On the other hand, once there is LBBB (as in Sgarbossa's), the significance of STE in aVR cannot be ascertained anymore.

On the other hand, Wellen's Type 2 can be easily missed if we do not know what we are looking for. 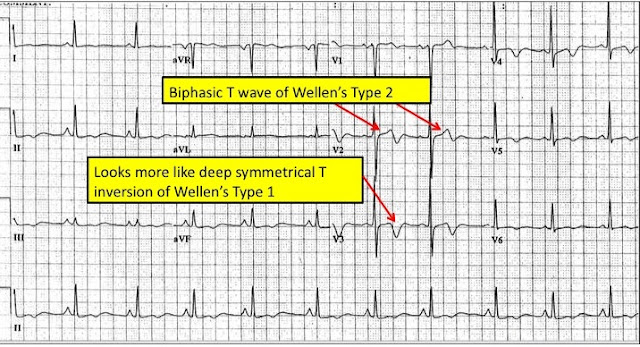 The danger with Wellen's is that at the time of presentation, the patient may seem deceptively stable with a subsiding episode of chest pain. However, in reality, these ECG changes in Wellen's may represent a critical ischemia of LAD; medical therapy most probably may not work. The patient should be sent urgently to the cath lab. Although relatively asymptomatic, the patient should be subjected to a stress test, as the critical ischemia may trigger sudden collapse in these patients.

Wellen's criteria is not dependent on ST changes, just the T inversion!

Note that young children and especially female up to 40 years, may have normal variant of T inversion (the juvenile pattern).

3. Posterior MI
Isolated posterior MI do occur in up to 5% of cases.
Do a posterior lead if unsure. An STE of even more than 0.5 mm is significant for posterior leads
I have previously written a detailed blog post on posterior MI.

4. STE in AVR
aVR is often called the forgotten lead. It is often ignored, often said to be of no use because of its position facing away from the normal direction of depolarization (rendering it to display negativity as reciprocal changes in most of the waveforms).

IN ACTUAL FACT,  ST ELEVATION IN AVR may SIGNIFY a LEFT MAIN CORONARY ARTERY (LMCA) STENOSIS with mortality up to 70%!!

Numerous articles have been written on this. It is coined as "a mostly ignored but very valuable lead in clinical electrocardiography", a "widow maker", etc.

STE in aVR should be interpreted in conjunction with the symptoms presented; and also, its significance would be rendered dubious in the presence of BBB.

5. Brugada Syndrome
Any physician living in this part of south east Asia (SEA) should have Brugada in mind when its typical coved-shape STE jumps out in right sided leads.  Brugada syndrome is now thought of to be more widespread than just confined to SEA population. It is related to channelopathies (particularly sodium channel) and is associated with sudden cardiac arrest in young population.

Brugada syndrome may be confused with RBBB but RBBB would present with ST dep, NOT STE!

However, WPW should be strongly suspected if the following features are seen in the AF:

Anyway, delta wave in WPW might not be seen. However, short PR interval should be seen in almost all leads.

NEVER give ABCD drugs (Adenosine, B-Blocker, CCB, Dig) AND also should NOT give Amiodarone in WPW (although in many literature, including AHA guidelines, amiodarone is said to be safe in WPW. It is not! See an article on this here).

The drug that should or could be given in WPW is procainamide.

Anonymous said...
This comment has been removed by a blog administrator.
Sunday, February 26, 2012

RCHI said...
This comment has been removed by a blog administrator.
Sunday, February 26, 2012

herbal products manufacturers said...
This comment has been removed by a blog administrator.
Friday, April 06, 2012