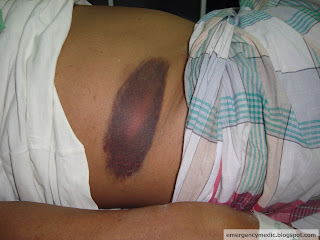 However, when British surgeon George Grey Turner (1877-1951) first described it in 1920, in the British Journal of Surgery, it was described as a sign of hemorrhagic pancreatitis.

Not many know about the pathophysiologic basis of this sign, however.  It is actually due to the action on the abdominal wall and skin of leaking extravasated pancreatic juice from the hemorrhagic or necrotizing pancreatitis tracked subcutaneously. It could also be the blood collection tracked subcutaneously from retroperitoneal organs in the flank region.

In this picture, CT scan was done; showing no evidence of retroperitoneal or intraperitoneal bleed. This patient had an intramuscular bleeding resulting in the bruise. Does this considered as a Grey Turner sign? But how do we know conclusively whether retroperitoneal bleed has actually occurred  without performing a CT scan? Isn't Grey-Turner sign a clinical sign?

This is how I remember it: you TURN to your side. Hence Turner.