The above ECG strips were taken from a 58 years old was admitted two days ago with history of chest pain that started about 30 minutes prior to admission to Emergency Department. (Click on each ECG strip to get a clearer, larger view.)

The ECF obviously show ST elevations in leads II, III and aVF, indicating that he has acute inferior wall MI.

However, leads V1 and V2 also show ST depression, and particularly in lead V2, an increase R/S ratio of >1 (previous ECG strip taken prior to this also demonstrated increased height of R but the ST depression was no so obvious as this one).

Posterior STEMI
The posterior wall of the LV is perfused by the posterior descending coronary artery, which is usually originates from the RCA (and occasionally from the left circumflex artery).
Therefore, posterior MI usually associated with inferior or lateral wall MI 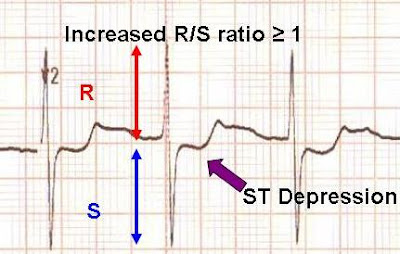 Note:
ST depression in V2 may also be due to septal ischemia; but in this case R:S ratio less than 1 and R wave width less than 0.03 s

However, increased R:S ratio ≥ 1 in V1 or V2 maybe due to other causes as well like:
a. RBBB
b. RVH
c. in young children and adolescents, can be a normal variant

increased R/S ratio in nonspecific for posterior mi as you mentioned also it can happen in wpw syndrome but and also it will help if you have older ecg for the patient which shows normal ratio.