Dengue: The New WHO 2010 Severity Classification

WHO, in its recent dengue guidelines 2009, has alluded to the fact that its existing classification into dengue fever and dengue hemorrhagic fever (further divided into 4 grades) have a number of limitations due to the rigidity of its criteria.  Download also the Malaysian guidelines on dengue management.

For example,  in a number of cases, patients can present with dengue and shock but without fulfilling all the 4 criteria for DHF These patients would have been classified as dengue fever if the WHO criteria were strictly applied.

The requirement of 20% increase in HCT as one of the evidence of plasma leakage is difficult to fulfill due to several issues: 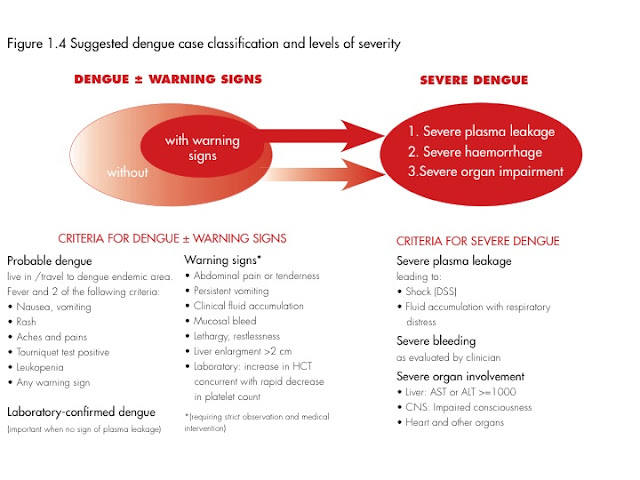 (* Previously, the following must ALL be present in order to classify the patients as having dengue hemorrhagic fever:

As such, since 2009-2010, WHO and Malaysia has adopted a new classification that is more pragmatic. The whole idea is to capture early the group of patients that may potentially deteriorate due to the following pathogenetic processes:

Under this classification, the patients would be classified into either

For patients to be classified as dengue fever (probable), the pre-criteria is that any patients living in or travelling ENDEMIC AREA for dengue (including Malaysia) AND with FEVER and with 2 out of the following criteria:

These can be remembered with the following mnemonic:

Other pointers in the diagnosis and management of dengue and severe dengue fever that should be kept in mind:

1. The earliest abnormality in the full blood count is a progressive decrease in total white cell count; not thrombocytopenia or increased hematocrit.

2. A relative bradycardia may be noted despite the fever, especially in the recovery phase. It is not always tachycardia in dengue.

4. Fresh whole blood or fresh red cells should be given whenever possible. This is because oxygen delivery at tissue level is optimal with high levels of 2,3 di-phosphoglycerate (2,3 DPG). Stored blood loses 2,3 DPG, low levels which may impede the oxygen-releasing capacity of hemoglobin.

5. If the haematocrit was low (<40% in children and adult females, <45% in adult males), this indicates bleeding and the need to cross- match and transfuse blood as soon as possible (see treatment for haemorrhagic complications).

The criteria in Surviving Sepsis Campaign Guideline for blood transfusion, i.e., hematocrit of <30% is not applicable to severe dengue. In fact, blood transfusion is life-saving and should be given as soon as severe bleeding is suspected or recognized. Do not wait for the haematocrit to drop too low before deciding on blood transfusion. This is because, in dengue, bleeding usually occurs AFTER a period of prolonged shock that is preceded by plasma leakage. During the plasma leakage the hematocrit IN FACT, increases to relatively high values before the onset of severe bleeding. As a result, when bleeding occurs in the later stage, hematocrit will then drop from this higher level; and therefore, it may not be as low as in the absence of plasma leakage.

6. A patient with normal SBP and normal mentation does not mean that he is not in shock. Patients in dengue shock often remain conscious and lucid. Look for narrowed pulse pressure despite normal SBP.

Once decompensation occurs, the BP may drop abruptly. Such prolonged hypotensive shock and hypoxia may in turn lead to multi-organ failure and an extremely difficult clinical course.

Differentiating chikungunya from dengue.
The key distinguishing feature for chikungunya is JOINT PAIN.

In fact, some clinicians came out with the aphorism “dengue + arthritis = chikungunya”!

The classical triad of clinical features for chikungunya infection are
•    fever,
•    arthralgia and
•    skin rash
(Ref: Robinson, M.C., 1955. An epidemic of virus disease in Southern Province, Tanganyika territory, in 1952-1953. Trans. R. Soc. Trop. Med. Hyg., 49 :28-32)
The arthralgia in chikungunya is usually symmetrical and involved more than one joint. The pain can be excruciating and involved fingers, wrist, elbows, toes, ankles and knees.

Dear Dr Chew.
Tq so much for this info.