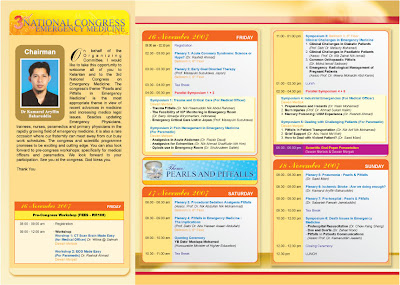 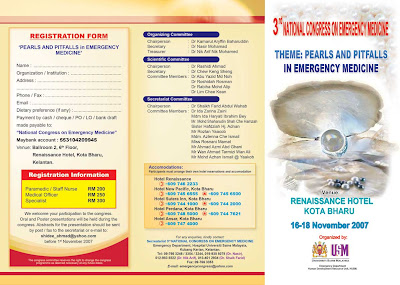 I have been quite busy recently since the Cardiology Update and not able to write a new blog. Anyway, the 3rd National Congress on Emergency Medicine is coming up. I will also be giving a talk on Pre-hospital Resuscitation during that conference.

Below is the summary of what I am going to talk (I have thought it is no point to talk again on the AHA/ILCOR Resuscitation Guidelines 2005 - that has been covered, and is already two years ago; new updates have come up and I have chosen three important ones to discuss on, namely the SOS-KANTO, BIPHASIC and TOR clinical prediction rule):

Despite the periodic development of various resuscitation guidelines, the survival rate of an out of hospital cardiac arrest patient is very poor. Nevertheless, for the last one to two years, there are new exciting developments in the area of pre-hospital resuscitation and some of these landmark studies will be highlighted in this lecture. Here is a summary of these highlights:

Early Recognition of Cardiac Arrest: Studies have shown that most (up to 75%) of out of hospital cardiac arrest occur in the private homes and residences setting; whereas most of the Basic Life Support courses are being conducted to school teachers, police forces, fire and rescue etc. These are important, but the very fact that most collapse occur at home means that there must be something more we need to do. We need to educate the family members regarding the importance of prompt CPR - knowing the fact that most of our public would feel panic in such a situation, all the more it is important to educate them. Could showing short documentary and video clips like those clips of gory accident scene to prevent reckless driving be ever applicable in this context?

Early Activation of Emergency Medical Services: In our own Malaysian context, a recently announced “Back to 999 ” approach, where a singular emergency number for all types of emergencies is a lauded effort, yet there is the problem of prank calls in up to 98-99% of all calls.

Early Initiation of Bystander CPR: The recently published landmark findings of the Cardiopulmonary Resuscitation by Bystanders with Chest Compression Only (SOS-KANTO Study) early this year show that patients with a witnessed cardiac arrest and a shockable rhythm would have a more favourable outcome if they receive chest compression only CPR as compared to those who received both chest compression and mouth-to-mouth breathing. These findings are so compelling that a recent editorial in Lancet suggest for an urgent need to change the guidelines and this finding is certainly a good encouragement to our Malaysian public to start CPR.

Early defibrillation: The BIPHASIC Trial is the first ever published data in 2007 randomized, controlled clinical trial to compare a fixed versus escalating energy levels for the recently widely used biphasic defibrillation. What makes this trial more relevant is that it is conducted in the out-of-hospital setting.

Early ACLS: The concern now is not whether paramedics are able to recognize a cardiac arrest patients, but rather paramedics are transporting too many recognized out of hospital cardiac arrest patients, many of whom have very little or no chance of survival. A recently published article on the prospective validation the Termination of Resuscitation Guidelines (TOR Guidelines) offer some suggestions of the types of patients that should and should not (and thus be pronounced dead in the field) be transported back to the Emergency Department. The TOR Guidelines is currently a hotly debated issue. Will the TOR Guidelines ever be applicable in our own Malaysian context where paramedics have little legal authority in terms of pronouncing death?

There are new exciting landmark studies going on in the pre-hospital resuscitation ever since Guidelines 2005. Nevertheless, recommendations remain recommendations, guidelines remains guidelines; at the end of the day, clinical judgement as well as the applicability of these trials within the local boundaries is still what is being called for.

hi dr chew.. I'm one of the attendants of the congress. just dropping by to ask about the slides for the 3rd congress emergency med seminars. When will it be uploaded? :) Really enjoyed your slot BTW.