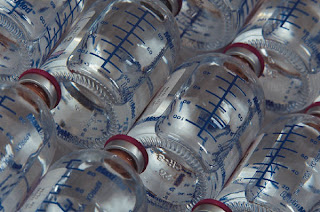 We encountered a case of 38-year old Malay female with history of myasthenia gravis. She presented this time with the complaint of difficulty of getting up after praying. She also complained of episodes of vomiting and passing out loose stools for one day prior to her presentation. She has past history of hypokalemia and for this current admission, her potassium level from venous blood gas analysis was on the lower end of 3.2 mmol/l. The hypokalemia probably aggravates her proximal myopathy. However, about half an hour later, she complained of progressive breathing difficulty, and at one point she was cyanotic and gasping. We immediately put her through positive pressure ventilation by bag-valve-mask. We almost thought of intubating the patient. What would be the better choice of muscle relaxant in this case?

The more predictable choice would be a non-depolarizing agent although they may slightly slower compared to scoline. The reason being the post-synaptic receptors are now being occupied by the auto-antibodies and therefore, if you use scoline you would probably need a higher than usual dose. And  its duration of action may be last longer because of the higher dose! And that's why, scoline may be rather unpredictable. On the other hand, the non-depolarizing type could be displaced away after its action through competition. Reference: http://emedicine.medscape.com/article/793136-overview#aw2aab6c10

We almost wanted to intubate this patient but fortunately the patient had a rather quick recovery of its respiratory and diaphragm muscles following a dose of neostigmine, and thereby intubation was avoided. We gave her NIPPV too. Literature seems to suggest NIPPV helps.

Chaudhuri and Behan (2009) has written a rather interesting and informative review article on myasthenic crisis and it is worth to download this article which is available free at URL: http://qjmed.oxfordjournals.org/content/102/2/97.full.

According to Chaudhuri and Behan (2009), respiratory failure is a must in definition criteria of myasthenic crisis. Furthermore, in that article, it is also mentioned that the continuous use of anticholinesterase (such as IV pyridostigmine) (which this patient, fortunately, did not require) as a therapy for myasthenic crisis remains controversial, especially because of the risk of cardiac arrhythmias and myocardial infarction. As mentioned in the article, coronary vasospasm from excessive anticholinergic treatment is known to be an iatrogenic cause of myocardial infarction in myasthenia gravis.  Besides the risk of cardiac complication, large doses of anticholinesterases promote excessive salivary and gastric secretions, which may increase the risk of aspiration pneumonia.

In that article, Chaudhuri and Behan (2009) also listed a table with various differentiating features of other common causes that may mimic myasthenic crisis. Click here for the table.

A final thought: in any syndromic case, a syndrome is a syndrome; a clustering of signs and symptoms. It is important to treat the underlying cause(s). One of the common causes in many syndromes is offending drugs. In the case of myasthenic crisis, the various offending drugs include:
the various groups of antimicrobials such as the aminoglycosides, the macrolides, tetracycline group, the quinolones (ciprofloxacin, ofloxacin, norfloxacin); anticonvulsants such as phenytoin and carbamazepine; antipsychotics such as the neuroleptics; beta-blockers, calcium channel blockers, etc.