Heuristics and Cognitive Biases in Decision Making During Clinical Emergencies

When faced with a potential clinical emergency situation, physicians are often expected to make diagnostic decisions within a limited time frame. A delayed decision, albeit an accurate one, is a futile decision if the patient deteriorates. Therefore, as almost always, such urgent decisions have to be made with some degree of uncertainty. This is especially so in an environment like the emergency department. 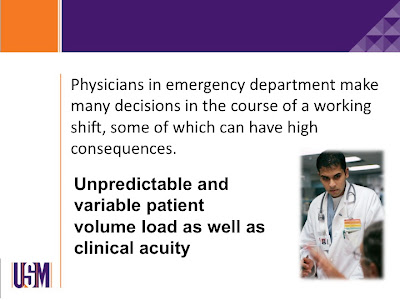 Physicians in emergency department make many decisions in the course of a working shift, some of which can have high consequences. Furthermore, emergency departments often have unpredictable and variable patient volume load as well as clinical acuity. Given the unfavorable nature of such environment, emergency department is often a place that is vulnerable to error. Under such circumstances, a physician in emergency situation often employs a compendium of heuristics (Croskerry et al, 2009).

Heuristics are mental shortcuts or “rules of thumb” or “gut-feeling” (Croskerry et al, 2009) used to assist a physician to rapidly make decisions without formal analysis. It is largely a form of gestalt pattern recognition that is intuitive and its accuracy is dependent on the experience of the physician. Two heuristics that are considered essential when faced with an emergency situation are the “rule-out-worst-case-scenario” and the sick/not sick dichotomy (Croskerry et al, 2009).


Ultimately however, the application of heuristics in clinical medicine is inevitable, particularly in emergency situations where every minute counts. For example, in a case of witnessed ventricular fibrillation (VF), immediate step of resuscitation and defibrillation is called for. In such cases, the physician must be trained with the ability for gestalt pattern recognition of VF even within the ‘blink’ of an eye. No time should be lost in searching for the underlying causes of the ventricular fibrillation. 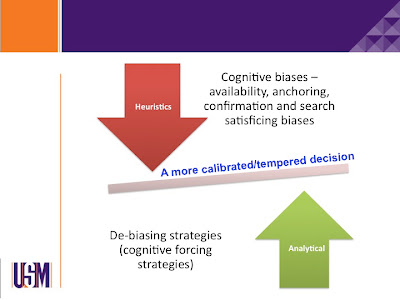 One form of cognitive forcing strategy often used is known as the metacognition. It describes an individual’s ability to stand apart from his own thinking in order to be aware of his own preferred learning approaches and ultimately to manipulate his own cognitive processes to his own advantages. In short, metacognition is “thinking about thinking.” It allows one to ask questions like: “How well did I do?” “What could I have done it differently if I am given a chance again?”, etc.

Therefore, making a timely, well-calibrated decision in an emergency situation is a critical thinking skill that should be inculcated in every physician. In fact, critical thinking in emergency medicine is defined as “the intellectually disciplined process of actively and skillfully conceptualizing, applying, analyzing, synthesizing, and/or evaluating information gathered from, or generated by, observation, experience, reflection, reasoning or communication, as a guide to belief or action” (Croskerry et al, 2009).

It is often assumed that every medical student would have developed this critical thinking skill by the time they have graduated from medical schools and would continue to further mature their cognitive process when they start working. After all, university graduates are expected to have a scholarly attitude towards knowledge and university is expected to be more than just a center for knowledge transmission (Biggs & Tang, 2007).

Unfortunately, within the specific context of undergraduate medical curriculum, the expectation that medical students will eventually develop matured critical thinking skill is largely empirical and yet to be explored or formally studied.

Furthermore, studies done in other field of tertiary education show potential cultural influence on critical thinking skill acquisition among undergraduate students. In fact, these differences have led to discussions and debates about the appropriateness of applying Western pedagogy for Asian students.

From some of these studies, it was shown that Asian university students are less likely to engage in critical thinking compared to their Western counterparts. In many Asian countries, the teaching and learning activities are often exam-driven in large-sized classrooms and structured around the goal of succeeding in examinations (Biggs & Watkins, 2001). Furthermore, Asian learners are usually perceived as silent, passive, uncritical and compliant rote-learners who rely on memorization (Biggs and Watkins, 1996); although paradoxically, despite of this rote-based learning strategy, Asian learners have often been found to outperform their Western counterparts (Biggs and Watkins, 2001).

Even within Malaysia, our tertiary students are found to be rather reserved about voicing their own opinions. One of these culturally influenced perceptual learning styles is their preference to be neutral, to “save face” as well as to adopt a conservative rather than confrontational approach (Yong, 2010).


The questions therefore are:

What is the preferred learning style of our medical students – passive rote learning or active engagement in discussion and challenges? And is this preference culturally influenced?

Does this pedagogy preference translate into the way our house officers deal with their seniors with they have a different opinion compared to their seniors? Do they passively comply with following orders or do they actively engage in discussion with them?

How does that affect our house officers when they face with a decision-making situation in clinical emergencies? Do they passively leave the decision to their seniors? What is their risk preference – they do prefer to choose a riskier alternative to “do something for the patient” (much like a gambling paradigm) or do they rather choose a more conservative approach of “wait and see”?

Professor Croskerry has written a substantial number of articles and books on these topics. Click here to download an article by Prof Croskerry.

i am so much impressed after seeing your blog.it gives us knowledge so i just wanna say its knowledgeable.

Good Information About Heuristics and Cognitive Biases in Decision Making During Clinical Emergencies.