The Use of Exhaled Nitric Oxide Measurements In Asthma 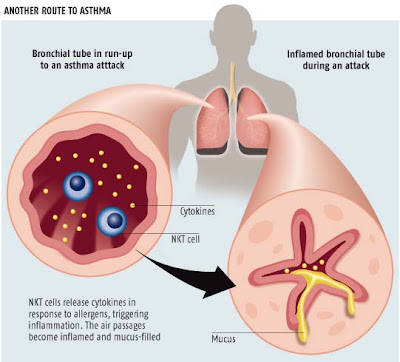 Not many of us know that there is a new marker for bronchial asthma - to aid the diagnosis, therapeutic monitoring, control monitoring, etc. This marker has been studied in many trials, but how extensive will this marker be used in clinical practice? Will it be readily available in emergency departments for day to day clinical use in the near future?
The past few decades have seen a paradigm shift in our understanding of the pathogenesis of bronchial asthma.

Rather than seeing bronchial asthma as a bronchoreactive airway disease, it is now seen as a TH-2 mediated inflammatory disease that involves both the large and small airways (Busse & Lemanske, 2001).

In fact, studies done during these last three decades have shown that distal airways inflammation (airways with less than 2 mm diameter) is a prominent feature in this disease (Martin, 2002).

Conventionally, the diagnosis of asthma is based on history, particularly with the presence of a triad of wheeze, shortness of breath and cough (GINA Guidelines, 2008) [Click here to download a free copy of Global Initiative For Asthma]. Unfortunately such manifestations are variable.

For example, the use of serial peak expiratory flow rate or spirometry measurements as well as demonstrating airway reversibility with an increase of FEV1 of at least 12% from baseline 15 minutes post bronchodilator inhalation (GINA Guidelines, 2008); but such tests are based on demonstrating abnormal airway physiology and may often not be present in mild asthma (Smith et al, 2004). [Excellent article. Click here to download full text in pdf]

Other surrogate or direct markers such as methacholine or adenosine monophosphate challenge tests, as well as fiberoptic bronchoscopy utilizing bronchoalveolar lavage, are time consuming, invasive and uncomfortable for the patients.

Being a relatively new marker for asthma, NO was first described in the 1980s (Zeidler et al, 2004). It was initially known as endothelial derived relaxation factor (EDRF), as it was shown to be responsible for vasodilatation of arterioles (Furchgott & Zawadzki, 1980). Subsequent researches also show that nitric oxide (NO) plays a role in inflammation, immunity and neurotransmission (Zeidler et al, 2004).

NO is produced from the conversion of L-arginine to NO and citrulline by Nitric oxide synthase (NOS). Constitutive expression of NOS produces low level of NO in healthy lungs. Inducible nitric oxide synthase on the other hand, is responsible for the increased levels of NO produced in inflammatory states in the lung and is markedly upregulated by interferon-γ, tumor-necrosis factor-α, and interleukin-1β and downregulated by corticosteroids (Robbins et al, 2004).

As mentioned, conventional tests, as mentioned above, are primarily based on demonstrating abnormal airway physiology, such as bronchial hyperresponsiveness. Therefore, these tests are not sensitive enough particularly in cases of mild asthma.

Furchgott RF, Zawadzki JV. The obligatory role of endothelial cells in the relaxation of arterial smooth muscle by acetylcholine. Nature 1980; 288 (5789):373-6.

I mostly visits this website[url=http://www.weightrapidloss.com/lose-10-pounds-in-2-weeks-quick-weight-loss-tips].[/url]Lots of good information here emergencymedic.blogspot.com. Let me tell you one thing guys, some time we really forget to pay attention towards our health. Are you really serious about your weight?. Recent Scientific Research points that almost 50% of all U.S. grownups are either obese or overweight[url=http://www.weightrapidloss.com/lose-10-pounds-in-2-weeks-quick-weight-loss-tips].[/url] Hence if you're one of these people, you're not alone. Its true that we all can't be like Brad Pitt, Angelina Jolie, Megan Fox, and have sexy and perfect six pack abs. Now next question is how you can achive quick weight loss? [url=http://www.weightrapidloss.com/lose-10-pounds-in-2-weeks-quick-weight-loss-tips]Quick weight loss[/url] is really not as tough as you think. You need to improve some of you daily habbits to achive weight loss in short span of time.

No has a definite important role in bronchial asthma.

A useful online guide for auscultation of asthma is: www.easyauscultation.com and also www.practicalclinicalskills.com