A(H1N1) Infection: Will there be a second wave? What about the vaccine? 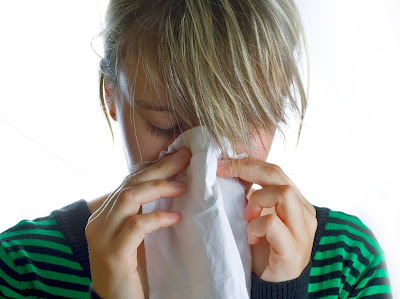 Having attended a CME Update on A(H1N1) infection, it opened up my mind of the many new developments that I am not familiar.

Basically, the two most important highlights are:
- Will there be a second wave of A(H1N1) hitting the world?
- what about the current status of the pandemic vaccine for A(H1N1)?

Many believe there is a strong possibility of second wave based on what had been known from previous flu pandemics, particularly on the Spanish flu 1918 (also due to the H1N1 strain).

In fact, the Spanish Flu had three waves. For example, look at the slides from the European Centre For Disease Prevention and Control (ECDC) website which can be downloaded free here: 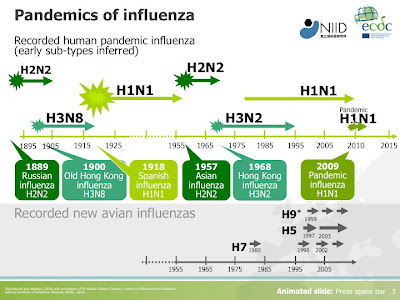 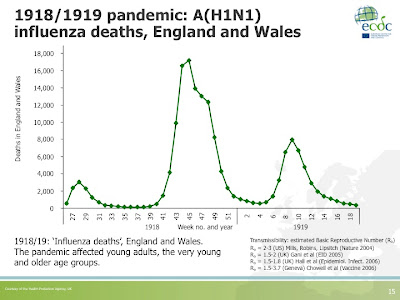 Vaccine
Much was said and discussed on the vaccine. The first batch of the 400,000 vaccine ordered by Malaysia is now available in many of the Ministry of Health (MOH), Malaysia hospitals. We were discussing as many MOH hospitals (including district hospitals) have already got the vaccine, when will frontliners in Hospital Universiti Sains Malaysia get their shot?

But when I posted up this issue to my Facebook community, I find that those in hospitals with the vaccine are hesitant and in dilemma whether to take or not. This in part, is due to the fear that the vaccine may cause the complication of Guillain-Barré Syndrome (GBS). This is because of the 1976 H1N1 pandemic – the vaccine given for that strain was linked to cases of GBS although to some, that has been exagerated. And, partly, as some said, it is because that the vaccine available is of the squalene-adjuvanated type (click for information related to this type of vaccine). This oil-based vaccination adjuvants like squalene have been proved to generate concentrated, unremitting immune responses over long periods. This vaccine also contains Thimerosal. Thimerosal has powerful and damaging effects on cells of the nervous and immune systems in mammals including humans. Thimerosal causes DNA fragmentation of neuronal cells and disrupts neuronal growth factor signaling at micromolar and even nanomolar concentrations.

The CDC recommends that the following five target groups (about 159 million people in the U.S.) receive priority for vaccination:

If the vaccine supply is not adequate for the target groups, the CDC has defined a subset for initial vaccination.

If the supply is adequate, vaccination should be made available to all adults aged 25 to 64.

Given that older adults (age, ≥65) have exhibited lower risk for infection, vaccination in this older group is recommended only after demand is met in all younger groups.