I was recently asked by a student to explain on the pathogenesis of the peripheral signs of infective endocarditis.

I don't think anyone could adequately explain the exact pathogenetic mechanisms of these signs - many of which, the exact mechanisms remain unclear.

And I have attempted to summarize the gist of that article below:

Few theories
1. Deposit of the septic microemboli from the endocardium
2. Nodes due to immunologically-mediated vasculitis caused by the circulating immune complexes.

Theories:
1. Necrotic microabscesses with an inflammatory infiltrate that involve the dermis but not the epidermis
2. Deposit of the septic microemboli from the endocardium

4. Splinter hemorrhage (this is a very non-specific sign - it can be due to many causes)

Some of the signs that I have seen in the most recent case of infective endocarditis: 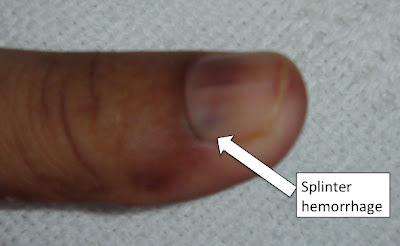 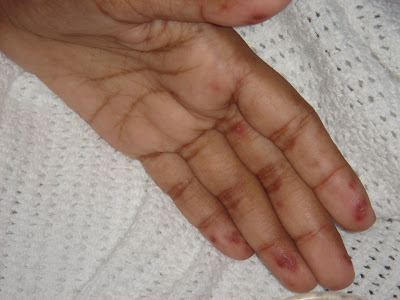 Another picture of Janeway lesion:

A picture of the Osler node can be found in this website: http://dermnetnz.org/systemic/osler.html

Infective endocarditis needs Duke criteria for diagnosis. The full table for Duke's criteria can be found in many standard textbooks and it is not intended to be reproduced here but a simple mnemonics to remember their principles is like this:

BE FEVEER
(*BE - Bacterial Endocarditis)

(Roth's spot - white centered hemorrhages)
Posted by cksheng74 at 9:59 AM

Thanks so much for posting this - I'm a student at OSU and was just looking for a picture of Janeway lesions and found your page through Google. This is really helpful - it's so much easier to remember what signs are when I understand why they occur.

Brilliant! Thank you very much! A grateful UK medical student :-)

Thanks to everyone for visiting my blog :)

Hi,
Again thanks. I was looking for some pictures to fix what the lesions look like. Could I add this as an additional and original aide memoire.

Roses have thorns so can be painful hence Osler's Nodes are the painful ones and often get you on the fingertips. Janeway Lesions are then the non-painful ones.

@Fishydishy, thank you for your comment. That's a catchy mnemonic. Very useful :)

I am a medical transcriptionst and wondered why splinter's, Osler's and Janeway's were presented as they were when transcribing the Skin exam. Your blog answered my question and thank you!
David