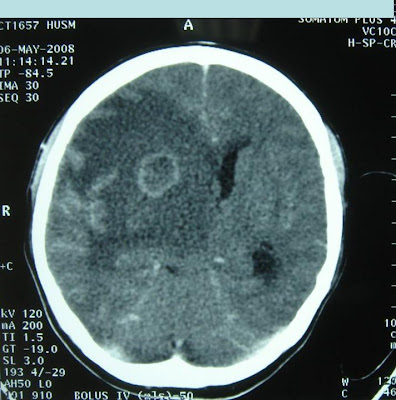 Working in emergency department many times inevitably involves the ability of reading CT brain film as this investigative tool (unlike MRI) can be done urgently (if indicated) in most centres in Malaysia.

Although we have the expertise of the radiology team on call, it still entails those of us working in emergency department to have a basic understanding in the interpretation of CT brain films.

Like in the image above that demonstrate a ring enhancement lesion on the right hemisphere.

Can be single or multiple ring lesions, but these are often at gray-white junction or along middle cerebral artery distribution.

Should also correlate with consistent history and other physical findings of bacteremia and a source of entry of the organisms.

Similar to cerebral abscesses, also occur at the grey-white junction. But cerebral metastases usually are multiple. Associated with a large amount of vasogenic edema.

But these usually occur deeper in the basal ganglia region and thalamus (like in this case), and particularly in MRI, the central of the ring lesion show another enhancement giving the appearance of a asymmetric target sign.

Primary CNS lymphoma may occur either as a single or multifocal lesion, but usually they are located right at the periventricular white matter or corpus callosum and appears isodense to hyperdense on CT scan.

Primary CNS lymphoma and toxoplasmosis are often difficult to distinguish as both occur commonly in the immunocompromised hosts.

A number of pointers may help to differentiate these two lesions (Primary CNS lymphoma vs cerebral toxoplasmosis):

Primary CNS lymphoma often apepar as a larger size lesion of more than 4 cm and involves extensively the white matter, at the periventricular sites; and it may even extend across or involve the corpus callosum. Whereas, the cerebral toxoplasmosis are often mulitple, and involves the basal ganglia or thalamus regions.

This often appear as a cystic lesion with a mural nodule on CT or MRI, and by identifying the parasite histologically on a biopsy, or by directly visualizing subretinal parasites on funduscopic examination.

A good discussion and picture of the cystic lesion with mural nodule can be viewed in this article from AFP. Click here.


The CT film shown above of a 48 years old female - at the current moment, the provisional diagnosis (consistent with her history and other clinical findings) is cerebral toxoplasmosis but we are awaiting further results and investigations.

A little bit about toxoplasmosis:
Itis an intracellular protazoan parasite, toxoplasma gondii and one of the most common opportunistic infection in HIV (CD4 < 100 per μL). Symptoms are usually secondary to reactivation of latent infection.

IT is important to quickly diagnose because very treatable with antibiotics

One must remember that toxoplasma antibody is not always useful as only 1/3 cases have rise in IgG and only 50% produce antibodies in CSF.

Therfore, response to treatment is the main method of arriving at a definitive diagnosis retrospectively.

As seen in the image above linked from the CDC website, cats are the main reservoirs of infection and become infected by ingesting tissue cysts. The cysts then reproduce inside the feline intestinal tract. Oocysts are shed in fecal matter and are extremely resistant to severe environmental conditions and disinfectants. Humans become infected by either eating tissue cysts in undercooked meat, through fecal-oral transmission from cat feces, blood or organ transplantation and transplacentally from mother to newborn.