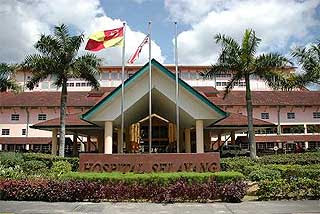 Mr. Siah shared in Malaysiakini.com regarding the unpleasant experience he had in bringing her aunt from Sarawak to Selayang Hospital. You can get the full article of that story by clicking here. But in summary, it is when her aunt, who had a cancer, had to be operated upon with expertise in Selayang Hospital. So, she was flown from Sarawak to Selayang but later was told that the operation had to be canceled because some emergency operation cropped up. And the surgeon in charge (Mr. B) said that the operation could be postponed until up to as long as two to three weeks (I think this is where the problem started. Mr. B was not tactful.) And he said that to a patient and her relatives that came all the way from Sarawak to KL!!

Of course, Mr. B did give alternatives to the aunt - either go back to Sarawak because a new surgeon from Selayang been posted to Sarawak General Hospital and could perform the similar operation in Kuching or wait in Selayang Hosp (two to three weeks(??), Mr. B while you are enjoying your Raya holidays?).

Finally Mr. Siah called up few ministers and VVIP and finally he got the new appointments for his aunt.

It is worth reading. I learn few lessons from that article.

I wrote back to Mr. Siah. This is my edited reply to him (I don't think I have a lot of things to hide. This is just my own views, anyway).

I refer to your article in Malaysiakini.com. I read with great enthusiasm that I decided to write back to you....

Since I have worked in as HO and MO in these places (HTAR, SGH, HUSM), I can identify very very well with what you wrote. I can imagined what had transpired during your ordeal.

Be honest with you, Mr. Siah, canceling or postponing operations is a norm rather than an exception in many (probably I should say ALL - I don't expect any exception) government hospital - doesn't matter whether it is a MOH hospital or a university hospital.

Most of the time, as far as I know, when postponement or cancellation of procedures have to take place, there must be a reason or reasons.

I have not seen (in my limited years of experience), a surgeon or doctor cancel an operation or procedure just for the sake of cancellation. It is an unpleasant job to go tell our patients that the procedures have to be canceled. It is just not ethical to do that (huh, still got doctor talk about ethical things ah?? actually I don't know whether I am qualified to talk like this or not)

Like in your case, this kind of scenario is very common, Mr. Siah. When an emergency case (especially trauma) came in unexpectedly and require a emergency surgical procedure, pushed in from emergency department (hah, this is where I work), that's it. Elective cases postponed. No choice. Elective cases means elective. Usually can wait. If can't wait (for example, the elective cases deteriorated with complications), then we will usually slot them into the emergency list. Being an emergency physician, I would certainly want my patient to get to the OT as soon as possible should an emergency procedure is required.

When I first read the article, my first reaction was "what again, another complaint made public, not just to the Malaysian public, but the whole world.,, can't the public understand, things are not as simple as it seems la.... making a complaint just because you are not happy with certain things.."

As I read further, I am getting more restless, I asked myself, who is this guy making such a big fuss of things like this.. It is.... common la, you know, in government hospitals; we are not in private where you can get first class treatment but leave your pocket empty la (trust me, every piece of gauze, every syringes are calculated in YOUR bill); we have to cater for everybody from the criminals (just this evening only we had to treat a caught thief trying to break in to a house), the poor, the rich, the Datos', even the royal families.

And one of things I hate, really hate (sorry, to be honest), is when a relative member or the patient himself pulling cable, calling up VIPs, VVIPs, royal families, pengarah hospital, pengarah this, pengarah that, in order to get special treatments like cutting queue to be seen and treated first, special investigations and tests, etc etc. What about those who doesn't have a cable to pull? Like the old poor makcik or a young mother who had been patiently sitting in the reception area for hours just for her child to be seen by a doctor for few minutes, I mean these are the people that I really have special empathy for.

However, as I read further, my focus began to change. Rather than just focusing on the doctor's perspective, I need to see from the patient's or relatives' perspective.

Here's what I learned from your article:

1. As a member of the medical profession, I am being constantly observed and watched. Members of the public will form impression on me and ALSO the hospital I work (see how Selayang Hospital name came out)based on how I behaved. And some of members of the public maybe a very very keen observer and I should be reminded of that (like the way you describe the sms time of the DG at 6.28 am and the sarcastic observation of the junior doctor in front of the computer. Did you actually approach her about it rather than just making an impression like that?

2. It is irritating and very very unfair for patient to be pushed around either physically (from ward to ward - it happened before, and news have came out before in papers) or in terms of appointments, etc (like in your case)

3. I agree, it is not right for Mr. B to say what he had said. He should never never have said 'maybe two to three weeks'. The public look up to the doctor to give them answers and hopes in times of sickness and when the doctor himself can't be sure, the patient would lose confidence. I don't know the tone of Mr. B when he said that. He may have said that (intentionally or unintentionally) out of his anger, out of his ego, out of tiredness, etc. But I learn that, at any time and at any cost, this does not permit me to be rude to the patient. I learn that, I must at all be good in communication with my patients, despite how frustrated, how tired, etc.

4. A promise made must be a promise kept. An alternative must be given to the patient, if the promise can't be fulfilled. but having said that, Mr. B did give alternatives to your aunt - like referring to the surgeon posted to SGH. However, again, he should not have said "two to three weeks later."

At the end of the day, I realize we doctors should be courteous, and remove our pride and ego. Thanks again, Mr. Siah. You could have gone through the conventional way of going step by step from talking to the sister, to the MO, to the surgeon himself, to the head of dept, to hosp director, etc etc rather than blowing it up. But again, sometimes it takes a hard knock to wake us up la. It is us doctors and our attitudes that should change.

Update (15/10/2007):
P/S: Mr. Siah did respond to my letter and had asked this is letter to be republished.
Click here to view the edited form of the letter in Borneo Post Online.